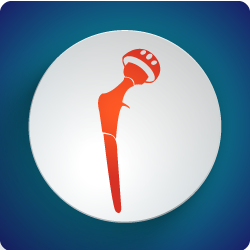 A patient is placed lying on the side on the operating table and clamps are used at the front and back of the pelvis to ensure that the pelvis remains exactly perpendicular to the ground. It is vitally important to have the pelvis positioned perfectly, or this will impact on assessing the alignment of the final implant. The posterior approach uses a curved incision on the side of the buttock. The first layer to cut through is the fascia which incorporates the attachment of a large muscle called the gluteus Maximus. This is split in line with the fibres all the way down to the pelvis. Once this is opened, it is held open with a retractor to visualise the short external rotators of the hip. Next to the short external rotators is the sciatic nerve, which is the nerve at risk during this approach. This nerve runs adjacent to the short external rotators and supplies motor and sensory function to the leg.

The short external rotators are then cut (3-4 of them) which includes the piriformis, gamelli and obturator muscles. These control external rotation of the hip, and is necessary to reflect from the bone in order to get to the hip. There is no way of performing a posterior approach without cutting these tendons from the bone, although in some less invasive methods, only 2-3 are cut instead of 4. At the end of the operation, these tendons are reattached to the bone to try to get them to heal – often through drill tunnels through the femur, and using sutures.

The hip is dislocated once the tendons are cut from the bone, and the neck of the femur is cut. The rest of the operation is performed in the normal fashion. At the completion of the operation, the nerve is palpated to ensure that a suture hasn’t injured it inadvertently or it hasn’t been damaged during the replacement by retractors. Once the patient is brought to the recovery room, and Xray is taken to ensure that the implant is enlocated (not dislocated) and in the correct spot. If an adjustment is required, the patient would need to return to the operating theatre for another anaesthetic immediately.

The benefit of the posterior approach is that it is extensile – ie: for complex revision operations requiring extensive work done to the shaft of the femur, this is a good approach for this as it allows the incision to be carried down the leg to perform this. The negative of this approach is the risk of dislocation, and often patients are told not to bend their hips past 90 degrees, cross their legs, squat or place their feet on ledges to tie their shoe laces.

The lateral approach is the first approach I learnt when performing hemiarthroplasty (half hip replacements where the ball only is replaced, and not the socket) as a trainee. It has the advantage of having a lower rate of dislocation than the posterior approach. A similar lateral incision is placed on the side of the buttock – and the patient position is the same as for the posterior approach. The fascia and gluteus Maximus is split in line with its fibres, and then instead of going through the back of the hip, where the short external rotators are, the deeper incision is through the gluteal muscles. The gluteus medius and minimus are cut from the bone, and reflected in order to expose the joint capsule. The muscles/tendons are reattached to the bone at the completion of the operation.

Instead go the sciatic nerve being at risk during this operation, the superior gluteal nerve is the one at risk. This is a motor nerve which supplies the gluteal muscles and the tensor fasciae latae muscles. The operation is performed in the same way as the posterior approach, however the repair is highly crucial to success in this approach. If the gluteal muscles do not heal to the bone, then patients are often left with a permanent limp. The typical finding after this approach is a relatively prominent rate of limping due to a Trendeleburg gait. This is a characteristic feature of gluteal muscle ruptures and can be an issue with this approach.

The lateral approach is less common in total hip replacement procedures, but more commonly used as a trainee surgeon performing a half hip replacement. It has a lower rate of dislocation compared to the posterior approach.

This is my preferred approach, and the method I use for all primary and most revision hip procedures. This is not a new approach, but one which has been around for over 30 years. Beginning in France and Switzerland, it is a tried and tested approach which is the fastest growing approach in the world currently. The direct anterior approach for total hip replacements is probably the 3rd most common hip replacement technique in Adelaide, but it is certainly becoming more prevalent as surgeons adopt this method.

The main points of this approach are that no muscles or tendons are cut during this procedure. It is unique in that it is truly inter nervous and inter muscular meaning that the approach does not go through any muscles and does not go through any planes supplied by the same nerve. This has the advantage of not potentially damaging any motor nerves. The Femoral nerve is quite far away and I have never seen it damaged in my experience. The only nerve at risk during this approach is the lateral femoral cutaneous nerve of the thigh – this is purely sensory, and only causes a patch of numbness on the side of the wound if this occurs. When it does occur, it is of minor consequence to most patients.

During this surgery, the patient is positioned on their back on a specialised table. In my operating theatre, I utilise a traction table which is attached to a carbon fibre table. The carbon fibre is used to allow X-rays to be performed during the surgery – something that I find enhances the accuracy of the implants that I place. The cut is typically 5-7cm in length and for our female (and some male) patients, sits in what is called the “Bikini” incision – ie: along the underwear line. During surgery the muscles are only moved to the side, and are not cut or detached in any way. This approach has a very favourable dislocation risk profile – there are no post operative restrictions to movement and patients are allowed to move as they can tolerate from immediately after the procedure.

Because an intra-operative image can be taken, this ensures that if small adjustments to the implant need to be made during the surgery, it can be done, instead of waiting until the patient is out in recovery prior to the first image. Despite performing many of these operations each week, I find that I am still tweaking the implant positions in small, but meaningful ways to ensure that the implant is positioned as well as I can prior to closing the wound.

The super path method of hip replacement surgery is the newest of these approach. It uses a similar pathway to that of placing a nail into the leg when someone fractures their hip. The incision is above the greater trochanter and the gluteus Maximus is split inline with its fibres. The gluteus medius is then retracted forwards, with care not to over traction on this muscle to avoid tearing it from the bone. The initial technique advises surgeons to start by cutting the short external rotators, and then reducing the number of tendons cut to only involving the piriformis, or possibly none, however looking at the approach, it seems almost impossible to achieve without detaching the piriformis. Please note that this is the one approach that I have never performed, however I have studied it extensively to see if it had any advantage to the direct anterior approach.

An interesting point on the brochure was that it stated that the hip is not dislocated during the procedure – this is not unique but also the same as for the direct anterior approach. In fact, this is of little consequence to the stability of a joint, even compared with the posterior approach and lateral approach as the head is still removed in all operations and therefore, the dislocation or non dislocation during preparation is not relevant clinically in any way. 2 incision are required during the super path technique.

“For all primary total hip replacements and for most revision operations, I perform them with the direct anterior approach. We also utilise pre-operative 3 dimensional scanning technology with the production of custom made cutting blocks used to ensure the procedure is performed as accurately as possible. For all hip replacements, intra-operative scanning is performed to check the position of the implants during implantation to ensure that they are positioned as planned. A pneumatic arm aids during the surgery in positioning instruments. Post operatively, patients are allowed to walk the same day of surgery if they are performed in the first half of the day, and the stay in hospital is 3-5 days in general. Most patients are performed under a combined spinal anaesthetic with a light general anaesthetic”

Whilst all approaches to the hip can be good, it is important to select one that your surgeon is comfortable with. Research shows that the best results are obtained when a surgeon is experienced in an approach and utilises that approach for your surgery. Choosing an approach should not be as important as choosing the correct surgeon for your operation. Careful consideration into the risks and benefits should always be explained to you prior to your operation.